Hello everybody sorry for the lack of posts, I've not really had much to show off recently and I was away in the lake district for a week so haven't been near my desk to slap paint or glue on anything. Hopefully this week I should be back on schedule so I thought I'd start with showing off the loot I'd nabbed from Salute:
http://slwarlords.blogspot.co.uk/

This was my first Salute and happened to fall just after my Birthday so meant that I had a large chunk of 'free' cash to blow on new toys. I went in with the proviso that I would attempt to keep the number of mini's that I purchased down to a minimum as I've got far to many as it is and with the Reaper Kickstarter arriving sometime soon I'll soon have more than a lifetimes worth of painting. All that being said I still somehow managed to come away with some mini's, here's the haul in all it's glory, I'll try and list it all below: 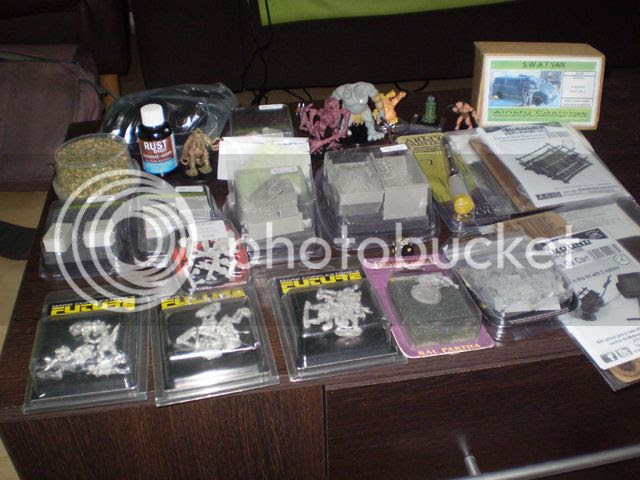 From top left working across and down:

1. Bag of mixed leaves for basing from http://www.antenocitisworkshop.com/
I used to make my own out of chopped up leaves but I always make too little or forget completely then can't be bothered when I need it so this is the lazy option.
2. Rust effect paint/medium from http://www.modelmates.co.uk/:
This stuff looks amazing from the demonstrations that the guys running the stand were showing off, I'll post pics when I ever get round to using it.
3. Prepainted starwars and D&D figures from http://www.tritex-games.co.uk/:
You can never have to many random monsters.
4. Ainsty Castings small skips http://ainstycastings.co.uk/product_info.php/products_id/256/osCsid/350c9c146379cecf253fefcd2d69cb1f
5. Ainsty Castings Swat Van
http://ainstycastings.co.uk/product_info.php/products_id/478/osCsid/350c9c146379cecf253fefcd2d69cb1f
6. More Ainsty Castings stuff, Skips, Salt Bins, Fax, Safe Desk etc
7. New pin vice form the Troll Trader
8. 4 Grounds Barbed Wire X2 http://www.4ground.co.uk/Default.aspx?page=268&pid=314
9. Copplestone mini's http://www.copplestonecastings.co.uk/range.php?range=FW
I bought the Scavanger Tank Busters and the two packs of not Predators that they do as I seem to have most of the rest of the Future Wars ranges.
10. Hurn Headtaker form Heresy http://heresyminiatures.com/shop/index.php?main_page=product_info&cPath=54&products_id=128
He's slightly larger than the Copplestone predators so should make a perfect leader.
11. Some random Dark Sun D&D monster that cost me £1
12. Some Stowage from http://www.antenocitisworkshop.com/
14. An Ox cart from 4grounds http://www.4ground.co.uk/Default.aspx?page=268&pid=327
15. Not pictured above, A nodding Donkey from Fenris games:
http://www.fenrisgames.com/shop.html#!/~/product/category=2202359&id=21794531

Last but by no means least: 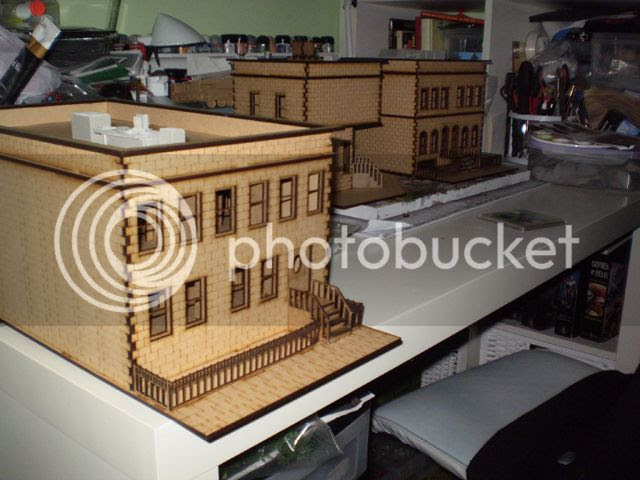 Three awesome Laser Cut buildings from Sarissa Precision http://www.sarissa-precision.co.uk/
I've been eyeing these up online for a long time but wanted to actually have a look at them in person before making a purchase and as they had a large stand with everything on display I finally bit the bullet and dropped a large part of my cash on three buildings: 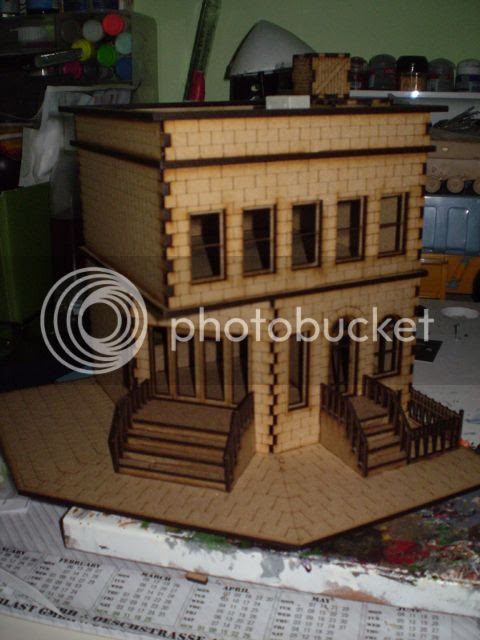 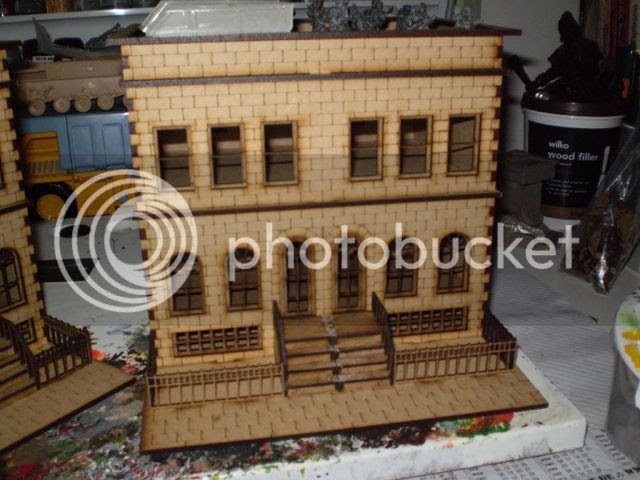 I intend to jazz them up with a little extra detail inside and out, I've already removed the middle banister on the bottom building as my 30mm bases didn't quite fit with it still on there. Now all I really need are some more sets of 28mm furniture...

That's all for this week, should have some more progress at the weekend and a few more pics of the buildings.
Posted by Headnhalf at 09:26 7 comments:

Email ThisBlogThis!Share to TwitterShare to FacebookShare to Pinterest
Labels: terrain

More post apocalyptic bits and pieces for you this week. As it was payday recently I decided to have a mooch around town and see what the retail gods would offer up for my painting table. First up I popped into TK Maxx and grabbed this from the toy section for £4.99: 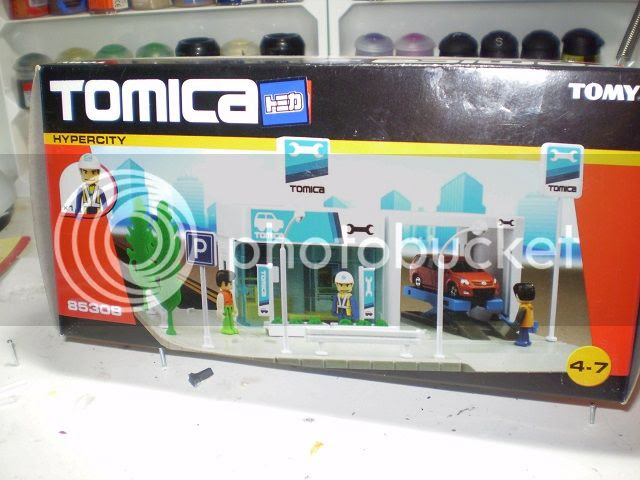 It looked roughly the right scale for 28mm figures so I gave it a shot, once painted up should work really well as a terrain piece. Here are a few shots of the pieces and the with some mini's so you can see for yourself: 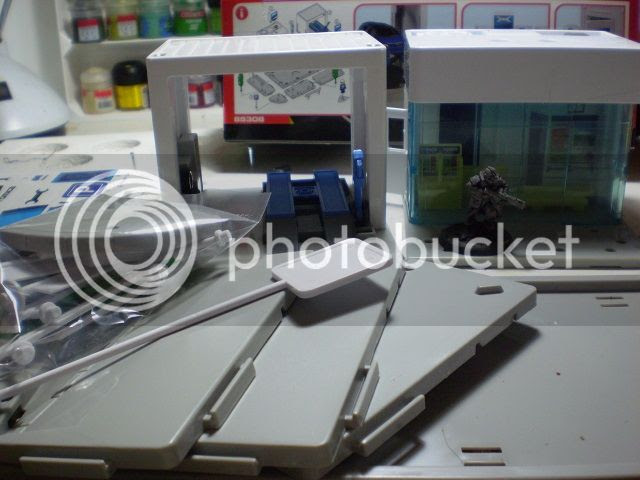 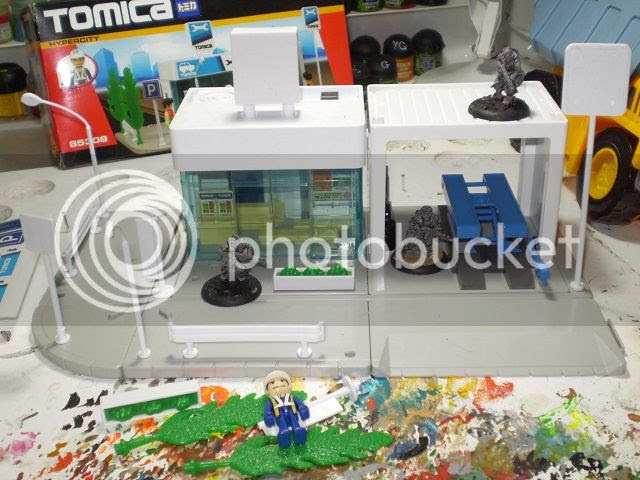 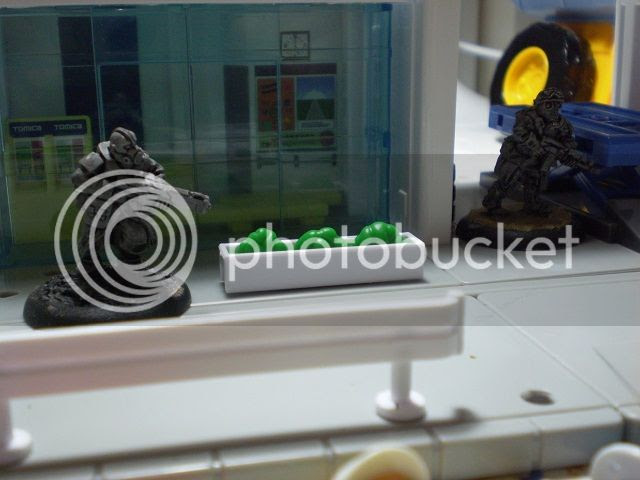 I also popped into Model Zone for quick look around and came out with a couple of airfix kits that were on sale, £1.99 for this little WWI tank 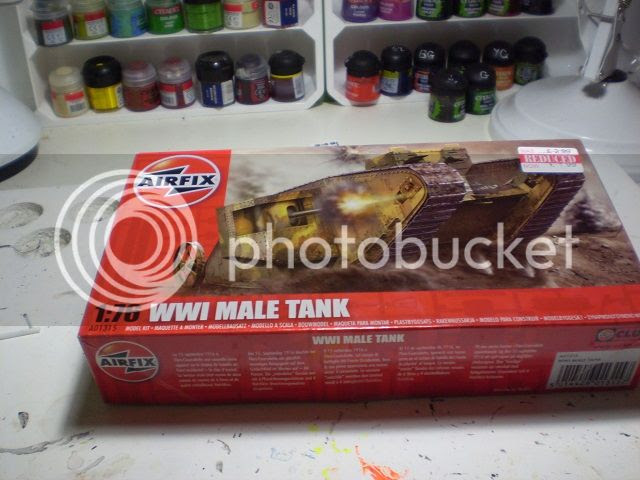 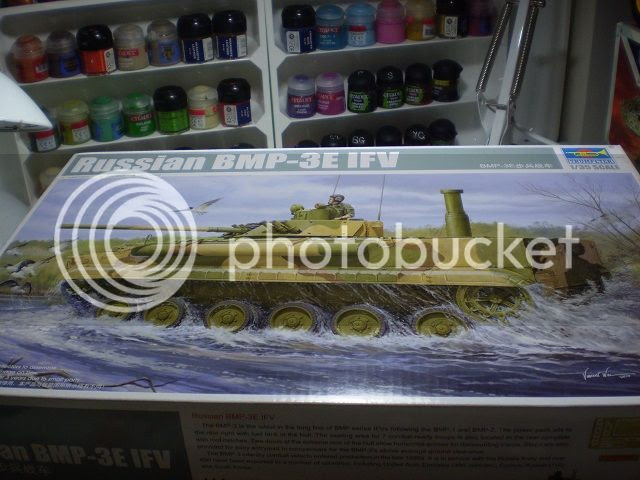 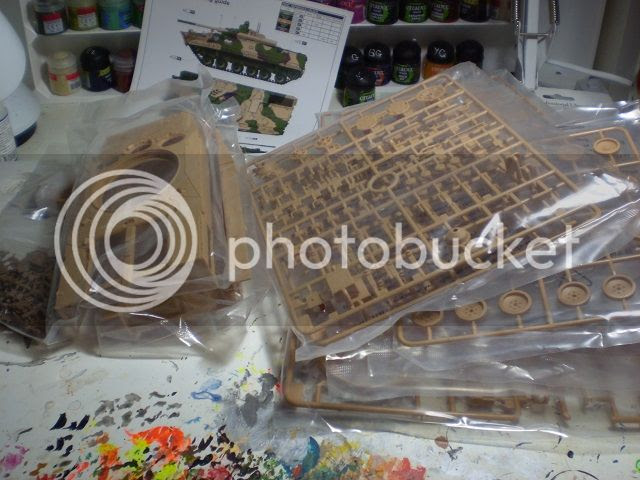 I think the Russian BMP should be easily apocalytic-iffied, it is a little on the large size (1:35 scale) but looking at the seating on the sprues they look about right for a 28mm arse.

As I've not put together any airfix kits for about 15 years I started with the WWI male tank and with a little tweaking ended up with a mini one man post apocalyptic flame tank. Most of the additions are Ramshackle games resin parts and a little extra plasticard. 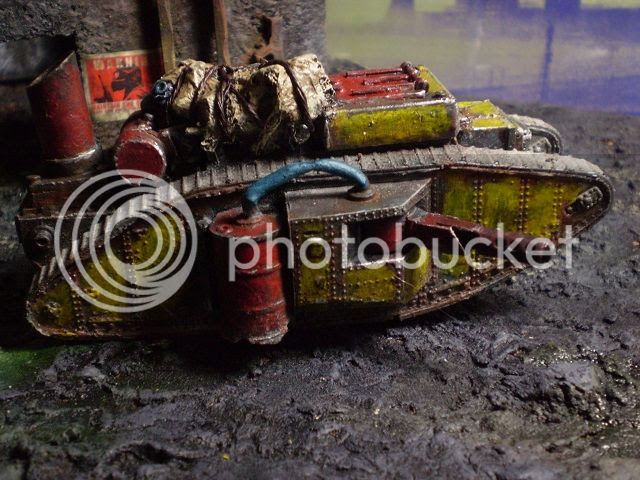 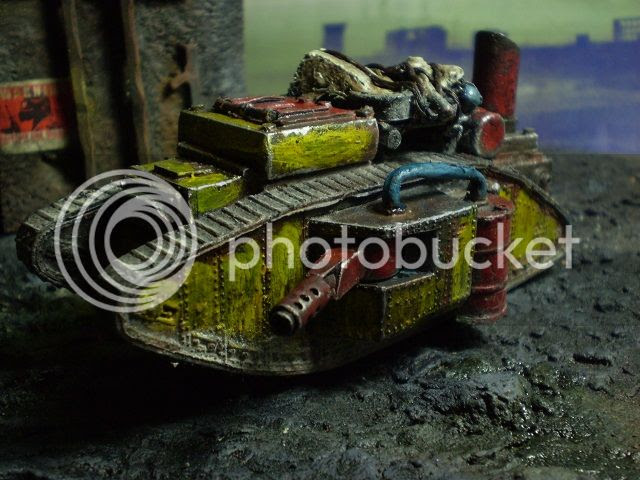 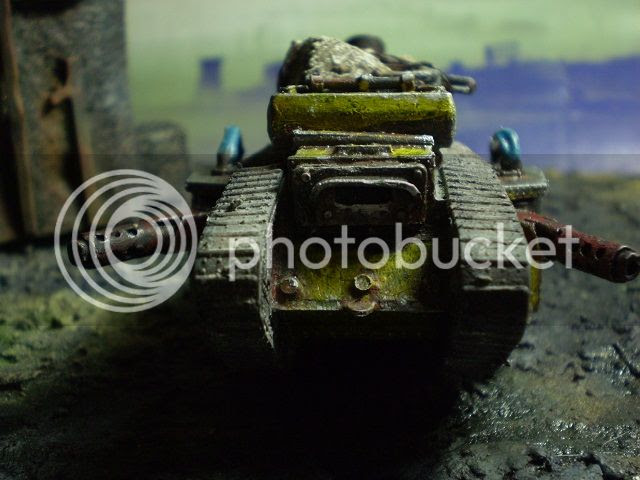 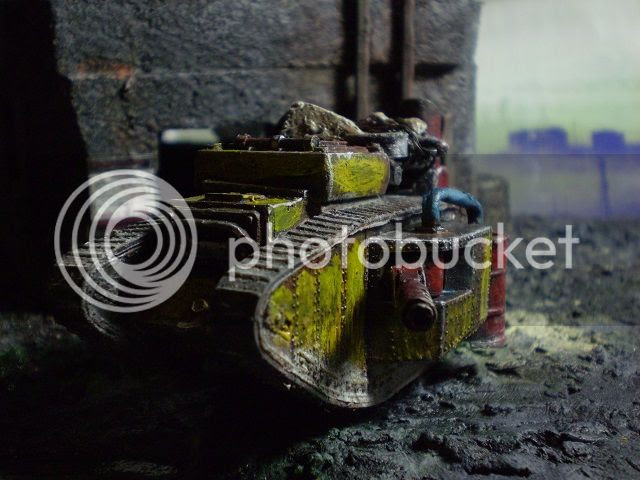 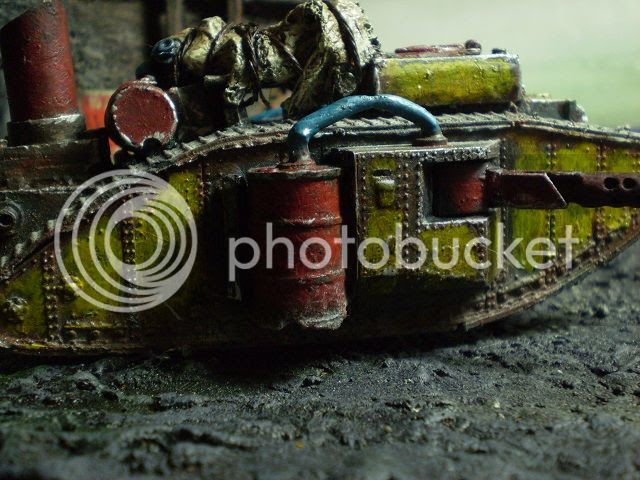 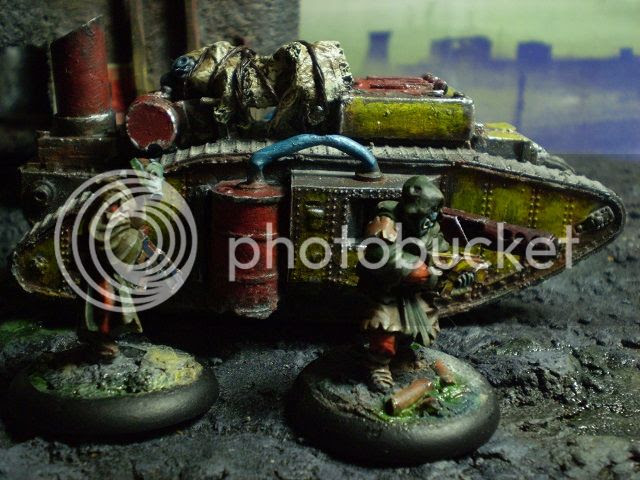